Have you talked to your kids about race, anti-racism, diversity, tolerance, and acceptance?

Studies have shown that even babies as young as six months react to racial differences so it is never too early (or too late).

Even teachers need to look at their own bias. In 2018, Dr. Walter Gilliam from the Yale Child Study Center, conducted a preschool teacher bias study, details are in this story on NPR: Bias Isn’t Just A Police Problem, It’s A Preschool Problem.

This article gives an overview of the demographics in town, articles about talking to children about this topic, a list of books for children by age group, and additional resources for adults.

With regard to race, ethnicity and economics, Southington’s population has traditionally been fairly homogeneous, but that is changing and we are seeing it most  dramatically with children.

In March of 2020, the Southington Public School district had 455 registered kindergarten students and 43 of them (9.45%) did not list English as their native language (per District).

The percentage of Southington students enrolled in the free and reduced price meal program was 8.1% in the 2007-2008 school year, it is now triple that at 24% and rising (see Chart 1 from Edsight). 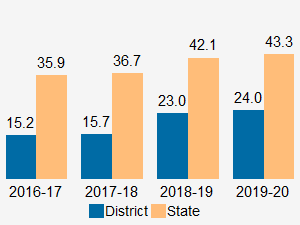 You can learn more via the Connecticut Town Profiles, two-page reports of demographic and economic information for Connecticut’s municipalities, regions, and the state as a whole. They contain information about population, major employers, education, fiscal information, labor force, housing and quality of life.

Articles and Other Resources

Talking to Kids About Racism – A school counselor and a children’s book author offer advice for talking to children about racism and George Floyd.

How to Talk to Kids About Racism: An Age-by-Age Guide – A brief summary from Today’s Parent.

Confronting Racism at an Early Age – Brief article from Harvard School of Education for educators.

100 Things You Can Say to Your Child to Advance Racial Justice – A collection of blog posts from Race Conscious.org.

Resources for Talking About Race, Racism and Racialized Violence with Kids – Interviews, resources, and articles.

Talking to Your Child About Identity – Resources that provide the language and information needed to discuss LGBT people and issues in an age-appropriate way with children and youth.

Coming Together: Standing Up To Racism – A CNN/Sesame Street Town Hall For Kids and Families – Hosted by CNN’s Van Jones and Erica Hill, along with Sesame Street’s Big Bird and friends, on Saturday, June 6, 2020, on CNN. CNN and Sesame Street join once again for a new Town Hall to help kids and families discuss racism and the protests taking place nationwide, build empathy, and embrace diversity.

“A is for Activist,” by Innosanto Nagara YouTube Read Aloud

“My Two Moms and Me,” by Michael Joosten YouTube Read Aloud

“My Two Dads and Me,” by Michael Joosten YouTube Read Aloud

“Mommy, Mama, and Me,” by Leslea Newman YouTube Read Aloud

“Daddy, Papa, and Me,” by Leslea Newman YouTube Read Aloud

“The Colors of Us,” by Karen Katz YouTube Read Aloud

“All the Colors We Are,” by Katie Kissinger (written in both English and Spanish) YouTube Read Aloud

“Happy In Our Skin,” by Fran Manushkin YouTube Read Aloud

“What’s the Difference?: Being Different Is Amazing,” by Doyin Richards YouTube Read Aloud

“The Skin You Live In,” by Michael Tyler YouTube Read Aloud

“Of Thee I Sing: A Letter to My Daughters,” by Barack Obama YouTube Read Aloud

“I Got the Rhythm,” by Connie Shoenfield-Morrison YouTube Read Aloud

“Momma, Did You Hear the News?,” by Sanya Whittaker Gragg YouTube Read Aloud

“Black All Around,” by Patricia Hubbell YouTube Read Aloud

“Julián Is a Mermaid,” by Jessica Love YouTube Read Aloud

“I am Jackie Robinson,” by Brad Meltzer YouTube Read Aloud

“Secret of the Dance,” by Andrea Spalding and Alfred Scow

“The Other Side,” by Jacqueline Woodson YouTube Read Aloud

“Freedom on the Menu: the Greensboro Sit-ins,” by Carole Boston-Weatherford

“Pink, Blue, and You!,” by Elise Gravel with Mykaell Blais

“I Am Jazz,” by Jessica Herthel and Jazz Jennings YouTube Read Aloud

“Pride: The Story of Harvey Milk and the Rainbow Flag,” by Rob Sanders YouTube Read Aloud

“Stonewall: A Building, an Uprising, a Revolution,” by Rob Sanders YouTube Read Aloud

“Fred Korematsu Speaks Up,” by Laura Atkins and Stan Yogi

“Resist: 35 Profiles of Ordinary People Who Rose Up Against Tyranny and Injustice,” by Veronica Chambers

“I Am Not a Number,” by Jenny Kay Dupuis and Kathy Kacer YouTube Read Aloud

“Not My Idea: A Book About Whiteness,” by Anastasia Higginbotham YouTube Read Aloud

“The Grand Mosque of Paris: A Story of How Muslims Rescued Jews During the Holocaust,” by Karen Gray Ruelle

“Shannen and the Dream for a School,” by Janet Wilson

“Have I Ever Told You Black Lives Matter,” by Shani King YouTube Read Aloud

“Pride: An Inspirational History of the LGBTQ+ Movement,” by Stella Caldwell

“We’ve Got a Job: The 1963 Birmingham Children’s March,” by Cynthia Levinson

“All American Boys,” by Jason Reynolds and Brendan Kiely

“Stamped: Racism, Antiracism, and You” by Jason Reynolds and Ibram X. Kendi

If you want to expand your own knowledge there are lots of books, articles, people to follow on social media, and other resources.

Teaching Tolerance Links – resources for educators and others who want to teach tolerance.

Scaffolding Anti-racism Resources – a list of resources organized in an attempt to make them more accessible.

LGBTQ Family Books for Adults, a list from Family Equality

Southington Women for Progress –  a women’s action group committed to making Southington a more just and equitable place for all residents. There are events and additional resources on their website and social media pages.

Southington PRIDE – committed towards building a future where everyone in our community has equitable access to the resources they need for lifelong success. They believe that by amplifying the voices of minorities and vulnerable populations; our community can work together on creating a more equitable future.

Registration for the fall of 2022 is underway. The preschools in town began accepting registrations in January.  The Southington Public School District's Kindergarten online registration opened on March 1. Learn more about registering and preparing for school.

Looking for childcare, pre-schools, healthcare providers, summer programs, enrichment activities, outdoor play spaces and things to do with your children? The Town Resources section lists all of this and more.

COVID-19 is impacting every aspect of our lives. This ECCS has information on the health, mental health, trauma, childcare, supporting children and more. We also offer a list of educational resources and activities.