CMV Risks – Cytomegalovirus Is a Greater Threat to Infants Than Zika, but Far Less Often Discussed

Cytomegalovirus or CMV, is a common virus that infects people of all ages. In the United States, nearly one in three children are already infected with CMV by age 5 years. Over half of adults by age 40 have been infected with CMV. Once CMV is in a person’s body, it stays there for life and can reactivate.  Most people infected with CMV show no signs or symptoms. That’s because a healthy person’s immune system usually keeps the virus from causing illness.

CMV is a hardy member of the herpes family, and it is directly transmitted by contact with saliva and urine — often from diaper-wearing children to adults, and by sexual contact, breast milk or blood transfusions. When CMV is transmitted from mother to child during pregnancy it is called congenital CMV.

Congenital CMV is the leading viral cause of birth defects. It causes mental retardation, liver disease, cerebral palsy, deafness and more disabilities than Down syndrome.

Yet, pregnant women, and childcare workers in particular, are not being warned of CMV risks, as highlighted in this recent New York Times article – “CMV Is a Greater Threat to Infants Than Zika, but Far Less Often Discussed”.  One in three pregnant women who become infected with CMV will pass the virus along to their unborn child. Although there is no vaccination or cure, diligent hand washing and avoiding saliva by not sharing food or utensils or kissing young children on the mouth can help prevent transmission from young children to pregnant women.

In January, Connecticut began a screening program to test any infant who failed a hearing screening for CMV infection so they can be started in an early intervention program.
According to the Centers for Disease Control and Prevention (CDC) , “About one out of every 150 babies are born with congenital CMV infection” and “People who care for or work closely with young children may be at greater risk of CMV infection than other people because CMV infection is common among young children…”

Stuart P. Adler M.D. of the CMV Research Foundation Inc., stated, “Pregnant childcare employees should be informed about CMV, assess their risk by serologic testing or avoid if possible caring for children less than 2 years age for the duration of pregnancy,” in his article, “Prevention of Maternal–Fetal Transmission of Cytomegalovirus.”

Lisa Saunders, Parent Representative of the Congenital Cytomegalovirus Foundation, has compiled a list, “What are the 13 things childcare workers need to know or do about CMV?” and give links to the sources on her CMV blog.

The National CMV Foundation offers this poster and has more resources on their site: 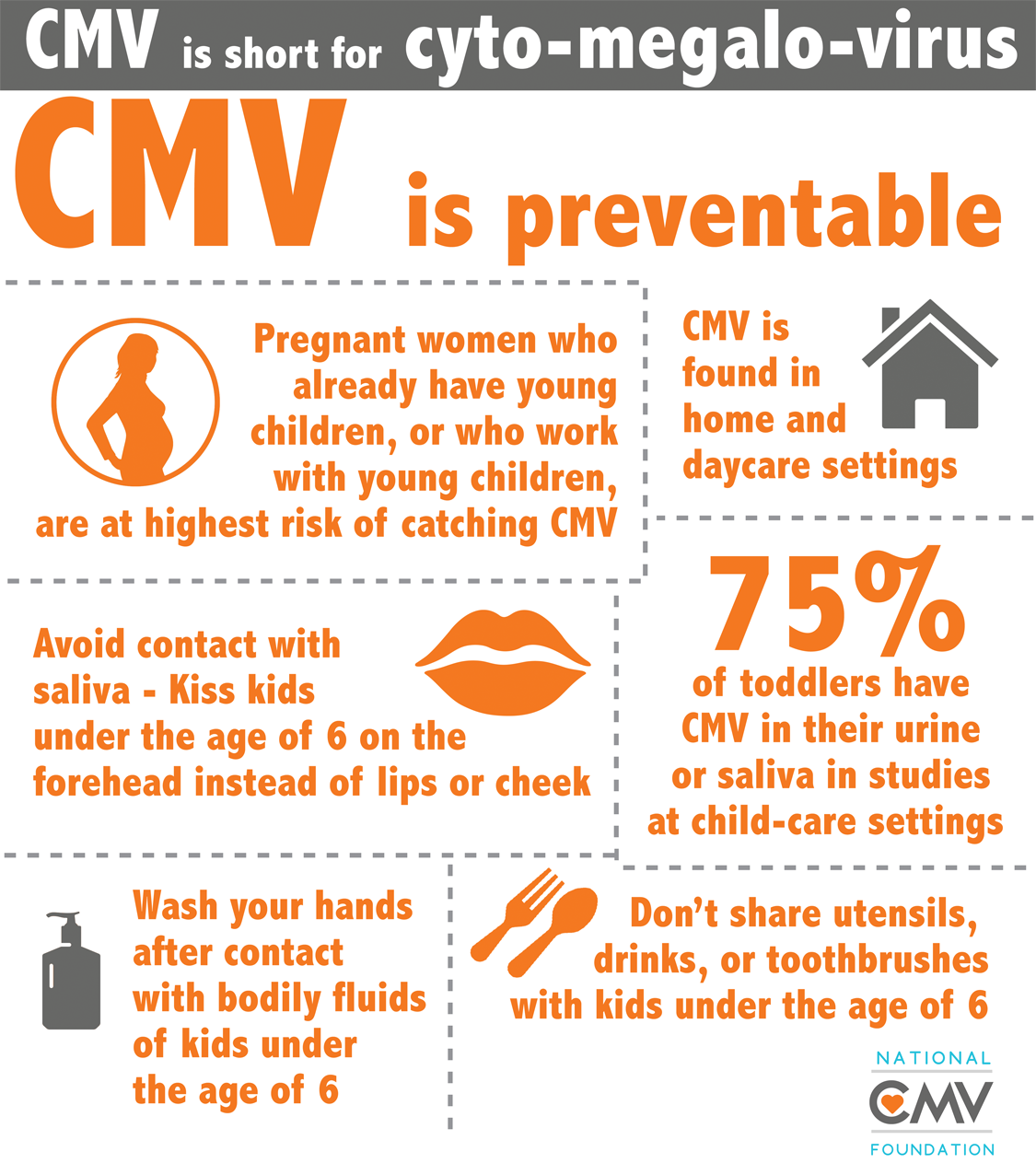